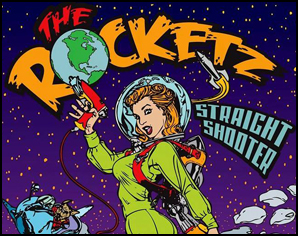 5, 4, 3, 2, 1… In this issue we blast into orbit for a brief visit with The Rocketz who’s debut CD entitled “Rise Of The Undead” completely blew us away!

Q: Why dont we start off with a breif bio on The Rocketz.

A: The Rocketz are Tony “Slash” Red-Horse vocals and guitar, Tony “T-Mac” Macias bass and vocals, and Andrew Martinez “Andy Demize” (We call him Mr. Pink.) We play rockabilly, punk rock and Psychobilly with hints of surf and garage. We like all genres of music and listen to quite an eclectic selection of groups especially on tour. We love music and love playing music. T-Mac also plays with So-Cal local Cumbia-Billy legends The Moonlight Cruisers and of course Andy plays with Nekromantix.

Q: How long have The Rocketz been around?

A: Our first show was The Demon Pit at The Doll Hut for Greasedemon Entertainment March 27, 2004. We’ve been playing tons of shows ever since.

Q: Tony, you’ve got quite the resume when it comes to playing with bands on tour. What is/was your favorite band to play with live aside from The Rocketz?

A: That is a hard question, although officially I only toured with three bands. Terror Train in the early 90’s, Levi Dexter in Japan 92, and Three Bad Jacks in 96 or so. Those were all good times. I also enjoyed playing with Robert Gordon and Rosie Flores. Good times!!

Q: If you had to take a long RoadTrip with anyone or any band alive or dead, who would it be?

Q: I recently popped in The Pyschobilly Sickness Volume 1 DVD and was treated to some Rocketz rocking, how did you guyz become involved with that project?

A: Well, that DVD was complete before we were making any noise, I believe that DVD was made by Ryan Davis of Hairball 8 which is our label so it was easy for him to stick us in as the menu music last minute.

Q: K.I.L.L.I.N.G. is the first “single” you’ve decided to push. With so many solid “single” worthy tracks on the CD how did you decide that song was “the one”?

A: That “one” song almost didn’t make the set list! It was slightly different when I first wrote that song and it wasn’t doing anything for me. I started leaving it off of the set and was just going to abandon that song, but I sat with it and retooled the chorus and changed the melody line and then BAM! I dug the changes and put it back in the set. To answer the question, I didn’t choose the song, our friends and fans did. It was being requested where ever Psychobilly music was aired. It was in limited rotation here in Los Angeles indie radio 103.1. It’s an easy song to like its simple and hooky. We are going to release a newer better recording of KILLING and Die Zombie Die on our next CD.

Thanks to The Rocketz for taking the time to sit down with the ‘Trip. You can pick up their debut CD Rise Of The Undead all over the web. For a little taste of thier tunes, head over to The Rocketz Myspace page at: myspace.com/therocketz or you can visit their official page at: http://www.reverbnation.com/therocketz.

Check out our Rocketz interview in it’s entirety in issue #2 of Rockabilly RoadTrip!
Get your copy here!