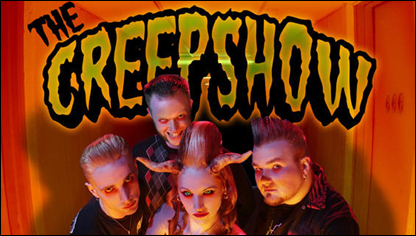 We Sell our soul to: THE CREEPSHOW 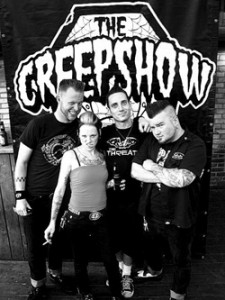 Buckle up, Babies, you’re in for a wild ride! Welcome to the first edition of “Rockabilly RoadTrip Vs.” Our first encounter features a clowder of cats known as The Creepshow, and these horrorbilly hellians were more than happy to take a tiny break from their touring schedule to answer a few questions for The ‘Trip. So get in gear and glue your eyes to the page, The Creepshow is ready to roll.

Q: We’ll start with the basics; For the uninitiated, how long have you guys been together? Any interesting stories about how the group was formed?

A: Hellcat and I (Sickboy), have been great friends for years and we had always talked about doing this band, but we were too busy with other projects. Finally, we started writing songs together and added the final pieces to the puzzle with Matt on drums and Ginty on keyboards. An hour and a half into our first band practice, we were so excited about the songs that we decided to record two of them, and one of the songs ended up on the Zombie Night In Canada Vol.2 compilation.

Q: Being from Canada, are you finding the US to be as supportive of your music as your homeland audiences?

A: Actually, the U.S. has been very supportive, although we are still looking for a U.S. record label. We get the majority of show request emails from south of the border, mostly California. We plan to invade the States as soon as we can get working papers!

Q: Fans are no doubt familiar with your MySpace™ page. (myspace.com/thecreepshow) How instrumental has the site been in getting the word out about your music?

A: Hahahaha, well, as lame as people think MySpace is, it’s such a great tool for promoting your band. From MySpace alone, we signed a Canadian record deal (Stereo Dynamite Recordings), booked two coast-to-coast Canadian tours, a European tour, and an upcoming U.S. tour. We have also made friends with some amazing bands through MySpace. And on our first tour across Canada, people were already singin’ along to our songs!

Q: So your new CD “Sell Your Soul” sold out pretty quickly all over. I’m imagining this was a great problem to run into. Did the initial demand just take you by surprise?

A: Totally by surprise. We couldn’t believe the mail-order response, and even the response at HMVs all across Canada!

Q: In addition to your recently released CD, you also just released another new song not available on the CD. What’s the deal on the “Halloween” track? Is it going to be released on a holiday compilation somewhere?

A: We’ve been playing The Misfits song ‘Halloween’ live and have been getting a lot of requests to record it, so we did! And we put it up on MySpace as a free download. We plan to do it with other covers as well.

Q: You mix a ‘50’s vibe with a modern rockabilly sound, your influences must be extremely varied. What other bands have you been inspired by?

A: Pretty much everything. Ginty is really into ska/reggae and Elvis Costello, Matt is a punk rocker, I like old hardcore and punk stuff like Dead Kennedys and The Clash, lots of psycho and rockabilly, Hellcat loves Elvis, Wanda Jackson, Johnny Cash… stuff like that.